In a previous series of two articles I described a sample web api making use of Owin and deployed everything on linux inside a docker instance. Microsoft is doing a great effort in bringing .Net to the next level by allowing to run .Net on the 3 major OS platforms. What is new in this post compared to the original articles mentioned above is the fact that today we can make make use of 3 new tools: DNVM, DNX and DNU to give cross platform deployment a better experience.

The DNVM, DNX and DNU

In case the .Net Version Manager, the .Net Execution Environment and the .Net Development Utilities are new to use, read following excellent codeproject article.

The good news is that all these new tools run both on windows, linux and IOS.

Get the sample project from Github

You can find here the sources and enjoy the new lean solution structure of asp.net version 5. Yeah, ultimately things are getting better in the Microsoft development world… The details of the new AspNet 5 can be found elsewhere on the net

The revival of the command line

Inside project.json wen can define now ‘commands’ that we need during development or deployment:

for example the ef (Entity Framework) tool will allow us to do the well known code-first database migrations:

Obviously, when using visual studio as development environment, the simplest way to start your project is using IIS Express: 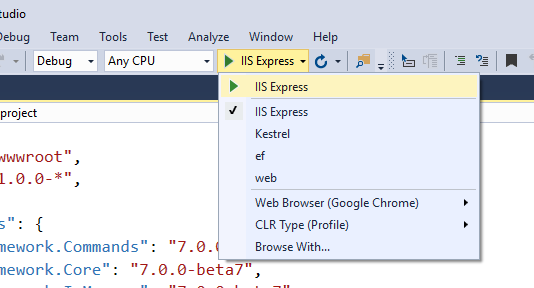 When running outside visual studio, you can start now as well via:

which will kick-off your project in self-hosted mode.

On windows we have DNVM, DNX and DNU available since we installed visual studio. Obviously, you can install them separately (that’s what you would typically do on a production server) and that’s what we need to do also on linux. The most simple approach is to use docker in such a way we have a full pre-fab AspNet 5 environment:

Inside the container, do a git clone of the

I love it ! Currently, I’m using in the sample the EntityFramework In Memory database provider. I’m pretty sure there will be exquisite support for SqlServer but trying the sqlite provider was without success. I hope one day I will combine both .Net and NodeJs apps on my favorite server environment Linux and simply chose between .Net or Node depending of typical needs and the required functionality.